SCM presented the Second SCM Distinguished Alumni Award to Vivek Mahbubani at the 2022 Commencement of SCM which was broadcasted on 29 May 2022. The Award was launched in 2021 to honour SCM alumni who have made outstanding achievements in and distinctive contributions to their professions, the School and the community.

After receiving the Sir Edward Youde Memorial Scholarship and graduating from the BA Creative Media programme with First Class Honours and a remarkable GPA of 3.99, Vivek Mahbubani took the skills he learned at SCM to become a self-employed web designer and developer and returned to teach as an instructor.

Yet Vivek was always making his classmates laugh; that's why in 2007 he made the bold move to try his hand at the art of stand-up comedy. After winning an international comedy competition both in Cantonese and English, he began doing night-time comedy routines while holding down his day job just in case. The rest is history.

Vivek has brought laughter to all parts of the community in Hong Kong and across the world. He often joins forces with charities for family shows and also uses comedy to good effect in motivational speeches, including a talk at CityU on “The Positivity of Humour.” A lot of people supported his growing up, so he sees this community work as an opportunity to “pay it forward.” Vivek is the recipient of numerous awards including representing Hong Kong in “Stand Up Asia” for Comedy Central Asia in 2016 and earning the Top Outstanding Young Persons Award in 2018. Many people will know him as a ring announcer for fighting events such as Mixed Martial Arts (MMA) and the Legend Fighting Championship. Vivek was a speaker at the SCM Graduation Ceremony in 2016 and spoke again to the graduates at the 2022 Commencement of SCM as a recipient of the Second SCM Distinguished Alumni Award, bringing much laughter and energy to both occasions.

SCM has developed over the years as a hub of creativity and innovation in Hong Kong, thanks to strong support from alumni like Vivek, and looks forward to celebrating many more winners in the future. 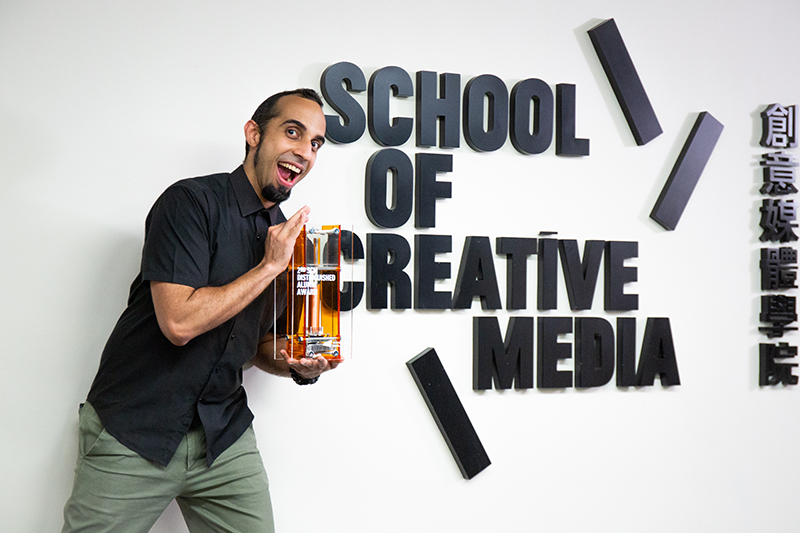