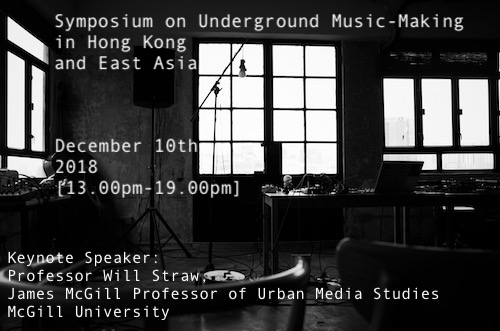 This public symposium brings together artists, scholars and event organizers to share their insights on key underground music productions broadly defined (recordings and various other objects; events; visual documents, etc.) and/or to provide critical accounts of some of the most important underground music actors in Hong Kong. While the symposium aims to emphasize contributions dealing with Hong Kong specifically, case studies dealing with Taiwanese, Mainland Chinese, Japanese or other East Asian underground music practices either specifically or comparatively are also welcome.

In a 1996 article on the state of popular music practices in the contemporary Chinese context, Yinyue Zhimindi argues that: "Hong Kong and Taiwan only know how to produce stars and idols" (qtd. In Steen 13). This assessment provides an incomplete picture of the situation in Hong Kong. Since the beginning of the 90s, Cantopop (and Hong Kong’s music market share more generally) have been on the decline, and the landscape of music styles and practices in Hong Kong has been increasingly diverse and fragmented (Chow & de Kloet, 2013). The last dozen of years have also seen the emergence of independent and, more marginally, experimental music scenes in Hong Kong, Mainland China and Taiwan. More recently, the closing or relocalization of several music venues in Hong Kong has attracted media attention and made clear the difficulties faced by musical underground event organizers (Charrieras, Darchen, Sigler, 2018).

For the purpose of the symposium, underground music is understood inclusively as an eclectic collection of commercially marginal styles and genres linked by “aesthetic sympathies of innovation and experiment” (Graham 151). While coverage on the development of underground music practices in Mainland China and Taiwan has been on the rise, scholarship and expert accounts about underground music activities in Hong-Kong lack visibility (particularly in English) in spite of its persistence since the early 1980’s.

This symposium is supported by the Hong Kong Arts Development Council, The School of Creative Media, City University of Hong Kong, Art and Culture Outreach.